This Bleeding City was published a year ago today. I thought I’d try to write down some of the thoughts and impressions that occur to me as I contemplate this mad, fantastic year. Firstly, though, I guess I should look back two years, back to when my agent delivered the novel to Faber, and a terrible period of waiting began, and every telephone call had me leaping from my chair, and finally… well, you know the rest of that story. And whatever happens later in my career as a writer, whatever successes come, I’m not sure that I’ll ever again experience the same extraordinary rush of joy as when I stepped out of my office into a tentatively sunny early spring day, my phone still clutched in my damp hand, and said to myself I’m going to be published by Faber. 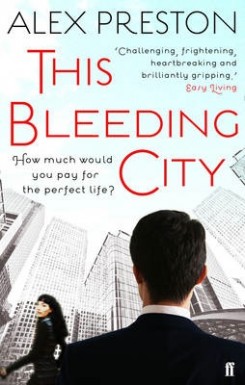 The lead-up to publication was full of excitement and trepidation, marked by mental oscillation between the certainty that the book would sink without trace and sinful dreams of success. The thrill of standing next to Andrew O’Hagan as he spoke about his next novel (Maf the Dog) at a Faber bash; the first time I saw that marvellous ff monogram on the spine of my book, with my name underneath; the foreign rights deals that started rolling in before the English edition was even published… There’s something precious in those early days before a novel is forced to enter the grubby marketplace. The faults that you know are there in the text recede, and you only think of those shining passages that really are the book. You allow yourself to dream without shame. 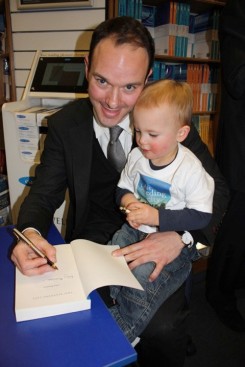 There were enough good reviews in the press to keep me sane, and you can read most of them here. The Financial Times review arrived in my inbox as I waited for my wife to give birth at UCH (a mere twenty-four hours after the book’s launch party). I tried not to let a grin break the expression of concerned sympathy I wore. The bad reviews tended to be obvious bash-a-banker rants, but I took them far too seriously and personally. Patrick Neate’s review in The Guardian was even more troubling, because – and this is every writer’s worst nightmare – much of what he said was spot-on. I still find it painful to read the review, although his words have helped me to turn my next novel into a far finer work than it would have been otherwise and so I must, through gritted teeth, thank him.

I wrote This Bleeding City in under six months, coming home from work in the evenings and eating in front of the computer, writing until my eyes felt like they would burst from their sockets, and then regretfully staggering to bed. No social life, no family life, just work. It was painful, but it felt necessary. The novel isn’t the masterpiece I wanted it to be, but I’m enormously proud of it, and delighted that – by and large – readers have understood the story I wanted to tell. To those who didn’t like it, I ask you to bear with me, and recognise that I wrote it in a mad rush, while still in my twenties, and, well, sorry…

I wrote a blog this time last year about how, given the economics of the world of publishing, the roulette-wheel nature of bestsellers and the hugely competitive market for fiction, it was unlikely that writing would ever be more than a hobby for me. I didn’t have the kind of City job that paid mega-bonuses, and had only a small amount put away for when the rains came. Two months later, however, I left my job and became that thing I’d only ever dreamed of – a full-time writer. Of course it isn’t as financially rewarding as the City – what is? – but I was wrong to write it off as a way of supporting a family. With foreign rights, and festival appearances, and the odd spot of journalism, it is just about possible to scrape a living as an author.

There have been many high points this year: seeing myself on the bestseller list as I walked past WH Smith on the way to work one morning; Edinburgh, Ghent and Cheltenham Festivals; winning the Spear’s and Edinburgh First Novel prizes; being selected for Waterstone’s New Voices campaign; meeting Diana Athill at the brilliant Shoreditch House Literary Salons… But what This Bleeding City’s success has gained me more than anything is time. I have been able to spend eighteen months writing the new novel – ten of them full-time. The Full Fathom Five will be published by Faber (although it’s now called The Revelations) in January next year – I recently signed a new, two-book deal with them. I have been able to craft it, rewrite it, iron out those faults that haste and chutzpah made me ignore in This Bleeding City. 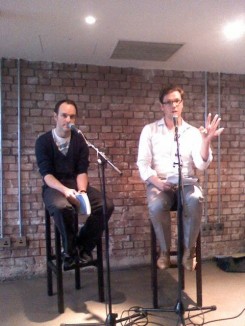 I don’t want this blog to come across as self-congratulatory, but I remember reading so many depressing and downbeat descriptions of the writer’s life when I was staring out that I thought I’d try and mildly redress the balance. Of course there have been dark days this year, too. The worst, perhaps, a literary festival in the north-west where my mother-in-law and her (small) book group were the only people to come and watch me speak. Or the hype and excitement about a film deal that saw a lot of expensive lunches eaten but no film. Or the American publishers that came so close to taking on the book but then didn’t.

I’ve been hugely lucky. I’ve had a brilliant agent, a fabulous editor and Faber’s magnificent publicity department behind me. I was lucky that Oliver James, whose extraordinary evisceration of the boom years, Affluenza, prompted me to write This Bleeding City, agreed to read my novel and then support it far beyond the call of duty. I have a wonderful family, a grandfather whose wise words are a constant inspiration, a wife far lovelier than I deserve. It has been an extraordinary year, and what’s most thrilling of all is that this is only the beginning.