I remember my first headmaster – an oak of a man, habitually silent and brooding – spoke to us one spring morning. I was twelve. Sunlight slanted into the hall and fell in bars upon my feet. I remember it clearly because there was rare emotion in his voice. This was a man left taciturn by the war, stiff with polio, fearsome to the boys. His wife generally spoke in assembly; he would stand behind her, thickset eyes roaming the room for whispering mouths. But this time it was him, and we were silent as he talked. He didn’t speak for long, but we watched, horrified, as tears crept into the furrows of his face. He spoke about how he hadn’t believed in God until the war. That the war had changed him. And how he hoped that we wouldn’t need to believe, that nothing would ever test us that much. His wife led him from the room and we all laughed, cruel and ashamed of our cruelty. 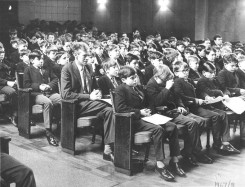 My wife and I have been living through dark days. Not any worse than those lived through by a hundred thousand others, no darker than the kind of days that are just part of life for many, perhaps for most. But it has been hard for us, has been something lying upon our shoulders, a weight that sometimes threatened to crush, to push the air from our chests. There were problems with the baby, problems that started five months into the pregnancy. As we teetered on the apex of time when words like “viability” and “compromised” are used, we spent long, dead hours in the hospital. We tried to read the flickers of emotion on the faces of consultants, looked for worrying hands, attempted to decipher the shifting sand pictures of the scanners. 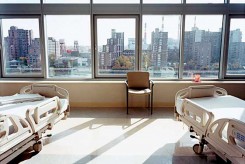 One night, perhaps the worst, I said a prayer. It was a bashful, self-conscious prayer, and somehow I had conflated the faces of the God I was addressing and my old headmaster, but I begged that the little one might make it through. That he or she would be given a chance to survive. That I might hold him one day, clasp her to my chest and screech Joanna Newsom songs until she slept as I had with my first son. My wife had taken to going to the bathroom on her own when things got bad and I was in the bedroom. It was four a.m. I stood at the window and pressed my face against the cold glass and I looked up, over the towers of the City, to a sky that was vast and unreadable. 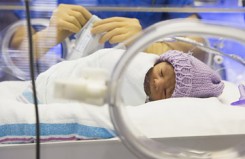 I had always been a grudging adopter of Pascal’s wager. I was happy to believe in a general and non-committal way in a benign God who held himself aloof from the affairs of man, as long as it didn’t stop me from doing exactly what I wanted. It always seemed to me that the belligerent atheism of Dawkins and his pit-bull allies was every bit as wrong-headed as the fundamentalists whose loony beliefs he mocked. Living through a period of personal grief hasn’t made a true believer of me yet, but it has encouraged me to adopt a constructive agnosticism, a willingness to ask the right questions, to read the right books. It seems like the least we should do, to give ourselves a chance, just in case. It’s a weak position, I guess, but it’s stronger than anywhere I was before.

As I said my prayer that night, wet palms pressed closely together, I promised I’d write this blog if everything worked out. We’re not there yet, but things are looking up. Four weeks to go until the birth and the scans seem normal now. The NHS has been extraordinary, the doctors wonderful, my wife majestic. But I can’t help think that someone else had a hand in this. And I will spend the rest of my life trying to work out if I’m just giving in to that atavistic impulse Freud talks about – the need to believe – or whether, perhaps, there’s more to it.