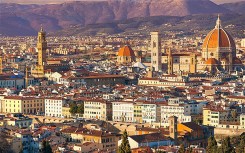 On Saturday evening, a little after five, I walked down through the streets of Florence to the Ponte Santa Trinità. Indian summer blasted over the terracotta rooftops, the sun’s last apricity sending crowds out to bask along the Lungarno, to loll on parapet walls. I made my way over the serene cobbled curve of the bridge and along the via Maggio. There, at number 16, in a discrete palazzo that once belonged to the Machiavelli family, stands the English Church in Florence, St Mark’s. It was where the hero of my novel, In Love and War, took refuge as first Fascism, then Nazism, drew their pall over the city. It was here, from the ‘30s to his death in the mid-‘60s, that Frederick Bailey, who features in my book, was chaplain. He was also a secret agent.

I’d been invited to St Mark’s, for many years the centre of Florence’s English ex-pat community, to speak about In Love and War and to open an exhibition celebrating the book. In the upstairs salone, arranged alongside other objects and artefacts of the time, there was the church register for the 1940’s, with Frederick Bailey’s scrawl noting the numbers in church one fateful day in 1941, the collection for that morning’s service, and then, chillingly, “Chaplain Rev FJ Bailey arrested & sent to Concentration Camp.” 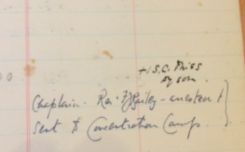 The exhibition, put together by archivist Penny Mittler, also contained a photograph of Bailey, newly come to light. He looks softer and more sinister than I’d imagined him and I’m rather glad that I hadn’t seen it when I wrote the novel. This got me thinking about the intersection of fact and fiction in historical novels, and how often it’s what we don’t know that is the engine of narrative, the imagination going in to illuminate the darkness, to fill out the missing spaces. 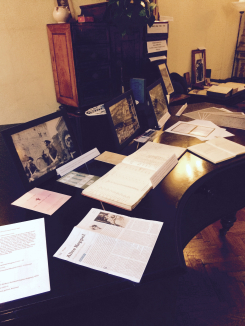 In Love and War came about through the work of admirable women. Penny Mittler and I had lunch at the Midland Hotel in Manchester in August, 2011, when she told me about Frederick Bailey, about the British involvement in the Florentine resistance. I’d been working away at the novel for a few months by this time, but it was Penny who lit the fuse of my imagination. Then Alyson Price, archivist at the British Institute in Florence, guided me through the Institute’s extraordinary collection of manuscripts and historical documents. I felt like I’d been handed my hero, a foppish Englishman, and his mentor, a dashing spy-priest, fully-formed, already living and breathing on the page.

The most admirable and inspirational women, though, were the heroines of the Florentine resistance whose courage in the face of extraordinary danger struck me again and again as I trawled through documents of the time. Young women like Tosca Buccarelli, Anna Marie Enriques Agnoletti, Andreina Morandi-Michelozzi carried out daring raids, assassination attempts, acts of sabotage under the noses of the Nazi occupation. The stories I came upon were so rich, so astonishing in their against-the-odds heroism, that I almost decided to put away thoughts of a novel and write a factual account of the city’s fight against first the Fascists, then the Nazis. Then I remembered that the novel is the best vehicle we possess into history, into the lives and minds of other humans, that fiction tells a deeper truth than dry historical fact. I took those factual stories and I wove my novel around them, with my fictional hero the envoy of the reader into this world of daring raids and looted art and dashing spies. 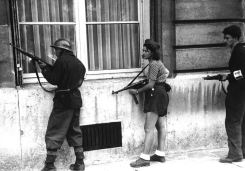 I spoke at the Small Wonder festival at Charleston in Sussex the week before coming to Florence. A member of the audience there asked me why there wasn’t an author’s note at the beginning explaining that so much of the novel is based upon actual historical events. I may indeed place one in the paperback edition of the book, but it seemed important to me, and part of the novel’s project, that it oughtn’t to differentiate between what actually happened, and what might have happened, should a young man like Esmond Lowndes have found himself in wartime Florence. My greatest challenge in writing In Love and War was to give those relatively few sections of the book that are purely invented the same note of authoritative authenticity as those I’d lifted from Florence’s rich history. 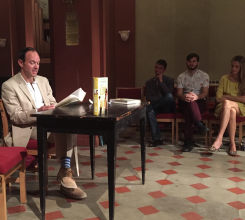 On Saturday night, as dusk fell over the city, a large audience filed into the womb-like interior of St Mark’s. I read a passage in the book in which Esmond and his lover, Ada, make exactly the trip I’d just made, across the Ponte Santa Trinità and into the church. I then spoke about Tosca Buccarelli and her attempt to assassinate the villainous head of the Florentine secret police, Mario Carità, and how I’d taken the web of different, often contradictory stories about her capture in February of 1944 (although some sources claim it was in July) and knitted them into a single narrative, and how I’d placed Esmond inside that heroic moment outside the Caffè Paszkowski. I was joined for the end of the talk by Neil Gower, who designed the extraordinary maps and illustrations that do so much to bring the world of the novel to life. 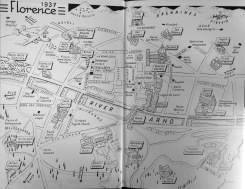 Afterwards, we swilled negronis in the very room that Esmond inhabits in the book, a teeming crowd of expat Brits, local Italians, American tourists and scores of others drinking and talking and admiring the exhibition until well into the night. 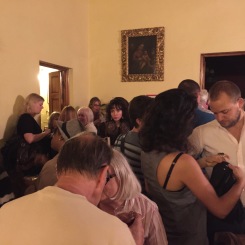 It was a magical moment – to stand there and breathe Esmond’s air, the most moving and spine-tingling of my writing career so far. I felt I was standing where I wanted the book to stand, between the present and the past, between fiction and historical fact. 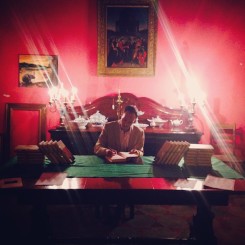