I started off writing poetry. I was a pale, rather studious teenager and this was what we did. I have the poems somewhere in a drawer – overwrought, humourless things that make my skin crawl now. The poem below is the first I have written for ten years, the first since I was a teenager. I was sitting on the terrace of a hotel in Paris. It was a morning in late-September and the sun streamed down onto me, a slight crispness sitting behind the sun-warmth to warn of cooler nights, falling leaves. 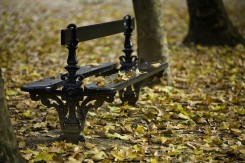 I was reading Fugitive Pieces by Anne Michaels, waiting for my wife to come down from our room. The book had moved me, although its voice was very close to the adolescent poet I had strained so hard to escape. A couple sat further down the terrace sipping their coffees and, in the still air their words came to me. They were arguing, something banal and familiar, the sort of argument every couple has. They were in their late-thirties and American and didn’t think they were being overheard. Then the argument darkened, a cloud past over and I shivered.

“I saw her hand on your arm,” the woman said. “You didn’t move. How could you? He’s your best friend.” The man sat very still, looking at the windows of the flats opposite. After a while he rose and went inside. The woman started sobbing silently.

I opened the back of my book, borrowed a pencil from the waitress, and wrote this down. It still sounds adolescent, callow, forced, but perhaps that’s the fate of all but truly brilliant poetry.

It feels as if I knew her first

The way, at dinner, her fingers closed

Around my arm when we spoke of

And their future and our past.

It’s not as if I call him a friend now;

During the autumn of my thirties.

Those that remain are relics

Held in place by the violence of their

And so when her hand, soft,

Slightly damp, closes around my arm.

I imagine worlds of meaning in that touch.