Starlings have returned to the trees opposite our house. Like the sparrows that once nested in the eaves, chattering and scolding the dawn, I thought the starlings had gone forever. I remember back when we first bought the house my wife and I were out all one night. We went drinking at Charlie Wright’s on Pitfield Street and then to a house party and then stumbling back through the rising summer morning we saw the starlings wheeling above the park, a flash of purple in the milky sky. 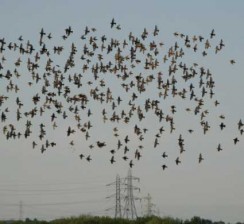 The starlings were gone for four years, and only now that we are getting ready to leave the house have they returned. They fill the air with their querulous cheeps sitting on the boniest fingers of winter branches in the highest trees. I salute them as I step out of the door on my way to work and sometimes they perform for me, turning as if they were one wing wheeling above. 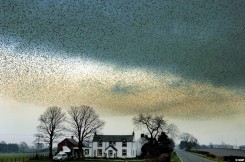 The starlings made me think of Yeats’ poem The Stare’s Nest by My Window. The nest is empty and the poet is praying for honeybees to come and inhabit the husk. The poem is a prayer for regeneration, for life to spring once again from the tattered remains of what was once a home and a cradle. We are leaving the house now, but I hope that the next people to live there find the same kind of happiness we did – long mornings in bed, dinner parties, a baby’s gummy smile. 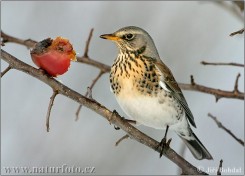 Fieldfares marked my Christmas. We were staying with my wife’s family in Shropshire and the birds flocked in a crab-apple tree outside the kitchen window. The complex dappling of their breasts will forever call up the joy that I felt this Christmas spending time with my little boy, chasing through the fields on sledges and warming our hands by the fire. It was a rather forceful metaphor when, this morning – our last before returning to London and work – a bird cannoned into the kitchen window and fell, lifeless, into a flowerpot in front of us. The frost swiftly beaded on its soft feathers and I called up those lines of Nabokov: “I was the shadow of the waxwing slain / By the false azure of the windowpane.” 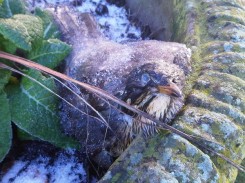